We reveal the hidden gems in London’s most vibrant, multicultural area

A library built on the sweet success of cubed sugar

The first wave of Jamaican immigrants arrived in Britain on the SS Windrush in 1948, and many settled in Brixton. In 1998, the area outside the public library was renamed Windrush Square in their honour, but the library has a second connection to the Caribbean. It was paid for by Sir Henry Tate, the man who patented the sugar cube, and whose company later merged with another to become the Tate & Lyle brand we know today. Tate was a generous man – among other things, he donated his art collection to the public, which became the Tate Gallery. It’s quite possible that some of the Jamaicans that arrived on the SS Windrush had relatives working the sugar plantations that made Tate’s fortune. 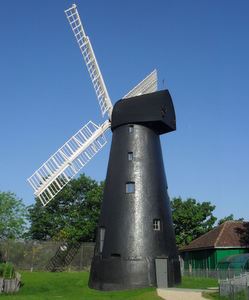 First built in 1816 as a traditional wind-powered mill for grinding wholemeal flour, and later converted into a more modern steam-powered mill that could produce white flour, Brixton Windmill lay derelict for decades until 2010, when a grant from the Lottery Fund enabled restoration work to begin. The windmill finally reopened to the public in 2011. Thanks to a committed band of volunteers, there are regular guided tours at the weekend from April to October, and they also offer an educational programme for local school children. If you’d like to volunteer your services, take a look at their website for details.

Dining with a difference at HM Brixton Prison

If you’re looking for somewhere to dine out, you might head to the small eateries of Brixton Village or the newly-opened Pop Brixton, but there’s something much more unique about a mile out of town. Within the walls of HM Brixton Prison – which counts David Bowie and Mick Jagger among its famous ex-residents – is The Clink restaurant, where inmates can learn catering and hospitality skills that will help them to get back on their feet once they are released. As it’s a Category C prison, you need to book a table in advance and there are security checks on arrival, but you’ll enjoy a good meal that tastes even better with the knowledge that you’ve made a difference to people’s lives.